It happened in the base of abundant and cheap labor from the 90s of the 20th century.  At present, the number and the amount of Chinese umbrella exports is about 80% of the total in the world. China is the biggest umbrella industry in the world and gradually formed some production bases like Zhejiang, Fujian, Shandong and Guangdong province.

The following seven towns are famous to umbrella businessman all over the world: Songxia Town, Nanyang Town, Sandu Town, ShiShan town, Longgang town, Dongshi town, and Taoyuan Town. Most of the umbrellas in local and overseas are produced in these professional towns.
Now we will make a description of these towns.

It is the largest base of umbrella production and umbrella raw materials export distribution in China.

At present, the umbrellas produced in Dongshi town is including sunny umbrella, beach umbrella, windproof umbrella, Anti-UV umbrella and others more than 300 kinds. The existing enterprises in Dongshi town about 300, employing more than 40,000 people. The annual output is more than 40 billion yuan, which is about 30% in the value of the industrial output of the town.

There are about 1263 umbrella enterprises with around 500 million pieces of all kinds of finished products.

After 50 years of development, Songxia town has become a large domestic production and export base of the umbrella, the output accounted in 25% – 30% of the total amount umbrella in China.

The cultural advertising umbrella share of the domestic market is about 90%, and sun umbrella, beach umbrella exports accounted for more than 50% of the country. Umbrella economy become a regional block with the characteristics of “small commodity, large gathering” China Bumbershoot city is located in Shishan town, Nanan City, Fujian Province. It located in the edge of Nanan, Yongchun and Anxi town with 96.2 square kilometers. The population is 86,000, excluding 16 Million people living in Hong Kong, Macao and Taiwan and overseas.

Shishan Town umbrella industry since 1985 by the introduction of Taiwan’s.
So far, It has the largest and most advanced automatic rib production and painting lines, with more than 30 advanced technology assembly enterprises and around 10 enterprises for supporting.

Employing more than 12,000 including nearly 1,000 professional and technical.
The main products: straight rib, fold rib, manual umbrella, automatic umbrella, sun umbrella, beach umbrella and so on more than 10 kinds of product.  The annual output is more than 600 million yuan. Products are mainly exported to Europe and the United States, Southeast Asia, the Middle East, Africa and other countries in the world. Taoyuan town which located in Heshan City, the hinterland of the Pearl River district, Guangdong Province.

Taoyuan was famous because of the people in Guangxu years of Qing dynasty plant a wide range of peach trees around an old temple, made it into a very beautiful area like The Peach Garden in Jin Dynasty of Wulingyuan.

Nowadays, no more beautiful peach trees like before when you walk into the town of Taoyuan, but the colorful umbrella business advertising brand.

Taoyuan town, with a total area of 54 square kilometers, consisted of 11 village committees and two communities, have a resident population of 22000 people.

There are 222 umbrella and other component factories in the town. It becomes a big industry with the annual output of 3.936 billion yuan.

The umbrella of Taoyuan, which created 15,000 jobs, driving 70% of the Taoyuan people to achieve flexible employment. China “Umbrella Township” Nanyang, located in the south bank of Hangzhou Qiantang River, is a strong economic town with the world famous tide resort as well.

Umbrella manufacturing with a long time development history is one of the two traditional industries of Nanyang. It was grown up step by step from the early 50s of the last century come out.

All kinds of umbrellas and large supporting enterprises more than 140 located in Nanyang town. The daily output is 500,000 pieces, annual output is more than 150 million pieces, which is 15% of the total output in the whole of China. 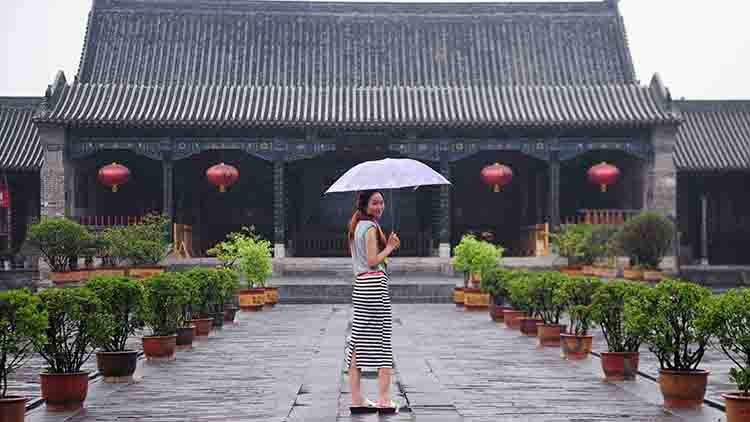 Jiande Sandu town is “China famous umbrella town”.
The history of the umbrella in Sandu town is 40 years, and the annual output umbrella production is 1/3 of the country.

The umbrella is worth to the people of the town from tradition and now grow up to a big industry because of so many years fighting on the umbrella market.
The umbrella industry cultivated not only a large enriching industry for Sandu town, but also dig out the first pot of gold for the local people. The global high-quality umbrella manufacturing base

Longgang Town in Shenzhen city is the base of high-quality umbrella manufacturing. After more than 30 years development of industrial agglomeration, here is the area of high-precision umbrella materials, standard fine workmanship and completed supporting cluster industry chain.

It provides the most fashionable, high-quality umbrella to the world and shared 60% of the global high-quality  Umbrella market.